Taken in Torres del Paine National Park, Chile, on March 11th, 2017 while on assignment for the Nikon 8-15mm fisheye lens. 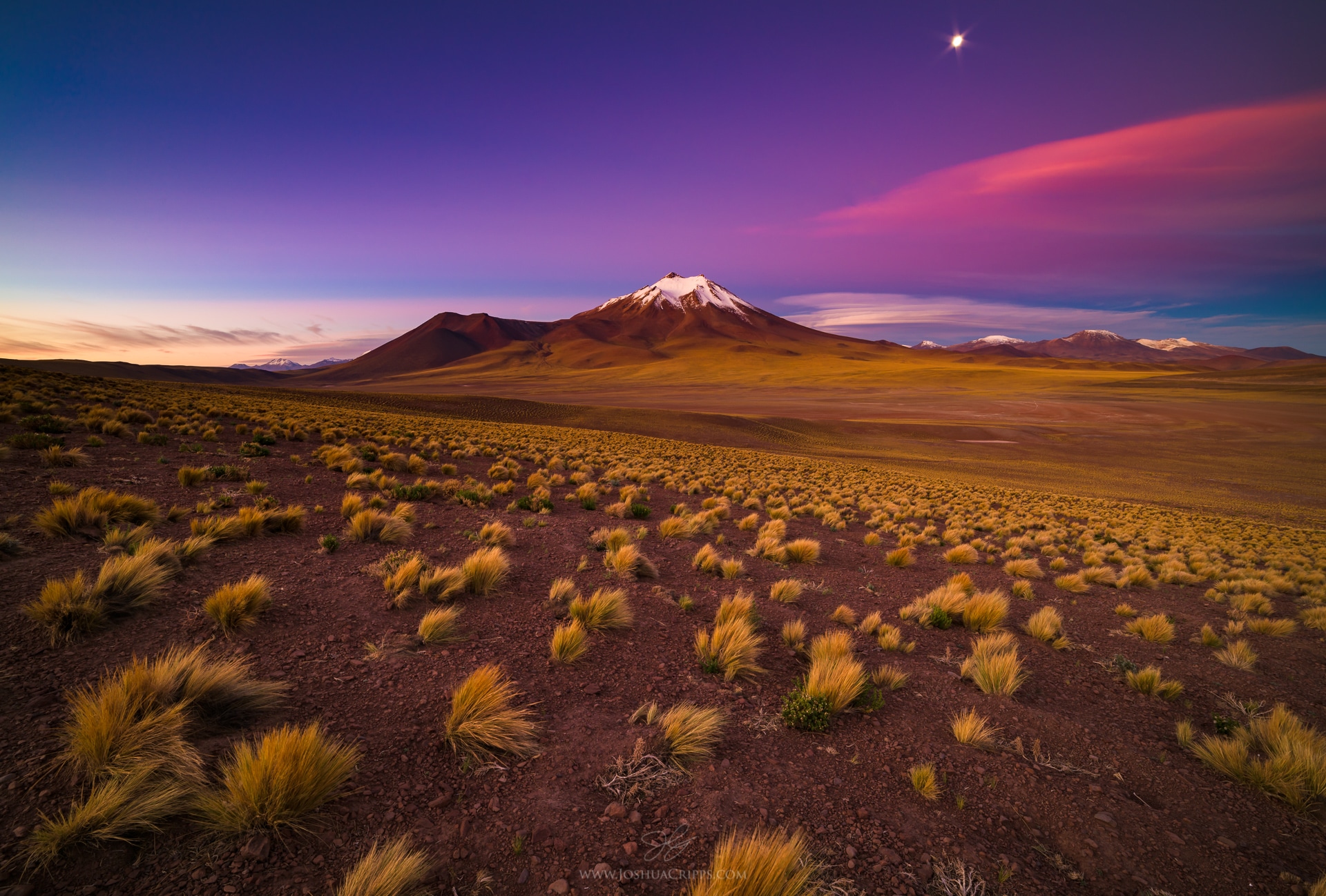 Taken from somewhere in the Atacama Desert, Chile, on April 7th, 2017.

The Atacama Desert is one of the most surreal, entrancing landscapes I’ve visited. It’s incredibly stark and dry, and in some areas there is literally zero plant life. In many ways the folded earth and giant salt pans vividly remind me of Death Valley in California. But just when it starts to feel familiar the Atacama will throw you for a loop.

First off is the elevation. Instead of being low and hot like Death Valley, the Atacama is high and cold, with elevations ranging from 7,000 to 19,000 feet. There are brightly-colored flamingos that inhabit mineral-rich lakes that are toxic to humans. And of course, there are the volcanoes. A chain of enormous volcanoes runs north-south, roughly along the Chile-Bolivia border. Each of them is snow-capped, hulking, and surrounded by a landscape that is inhospitable to all but the hardiest plants and animals.

One of the mightiest of these is Miñiques, which towers above the landscape at nearly 19,400′. It’s an enormous complex of peaks, craters, lava domes and lakes that is visible for miles in any direction. While out exploring the landscape south of the town of San Pedro de Atacama I spent the afternoon wandering around the attraction of Las Piedras Rojas (the Red Rocks). But getting on toward sunset I spied lenticular clouds forming on the lee side of the Miñiques volcano and knew it could make for an interesting photo.

Gunning the rental sedan down the rough and bumpy road I drove to a vantage point where I could get the volcano, the clouds, the moon, and the scrubby landscape all in one frame. As the sun dropped below the horizon it lit up the lenticulars a gorgeous shade of fuchsia and I was able to capture this photo. 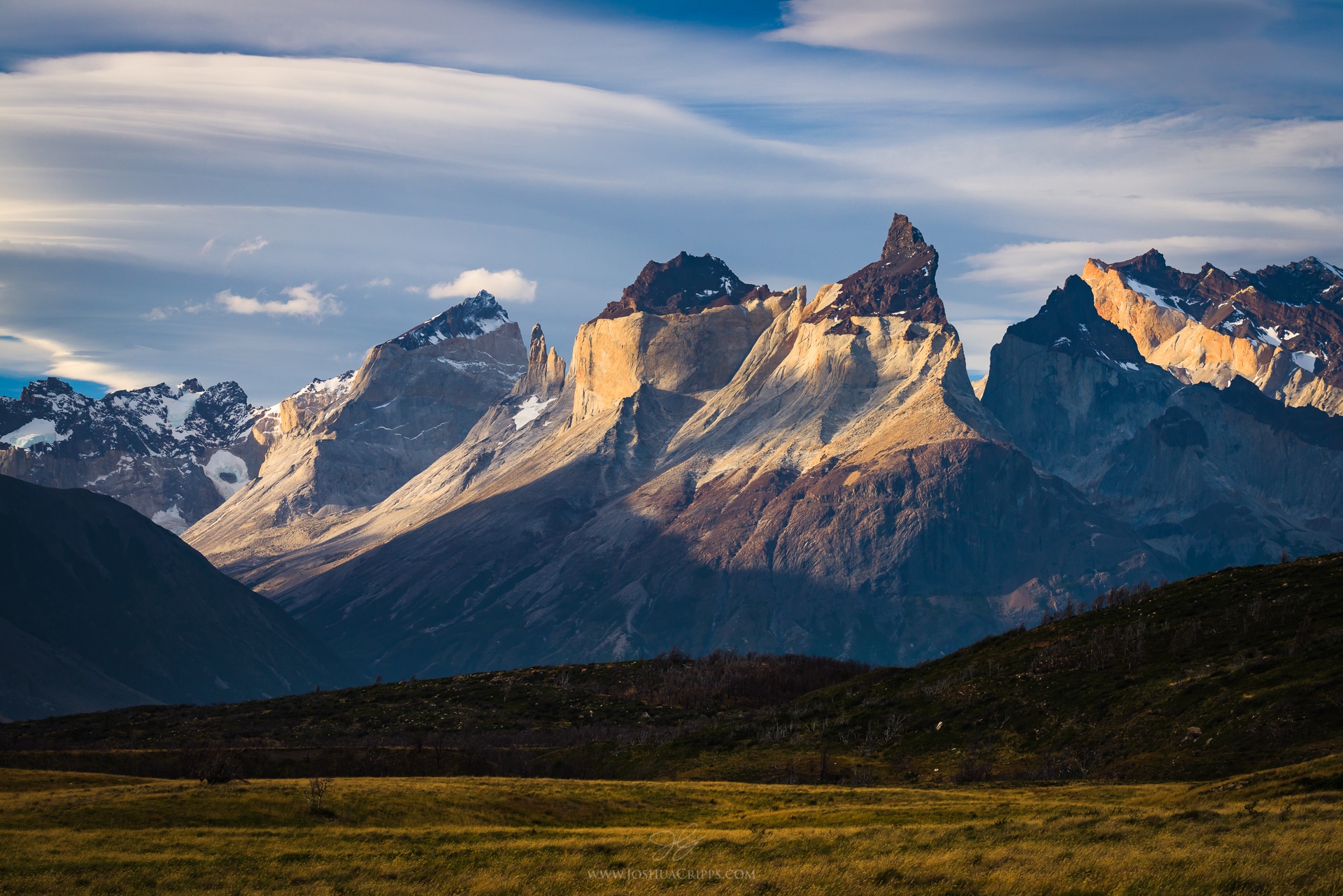 Chile’s most famous national park is Torres del Paine, which means The Blue Towers. And although those specific towers are striking -gigantic monoliths of rock jutting thousands of feet into the sky- they are somewhat inaccessible. Most people will only ever see them from far away, from a viewpoint miles and miles and miles away from the towers themselves. In contrast, Los Cuernos del Paine (The Blue Horns) are omnipresent in the park. The most famous, the most iconic views of Torres del Paine all involve Los Cuernos. And with good reason: these enormous columns of rock erupt over 6,000 feet from the shores of the lakes below. Their craggy nature give them an incredible character and aesthetic, and they are surely some of the most well-known and iconic mountains in the world.

Being mere miles from the western Chilean coast, this sub range of the Andes is also subject to a battering by the severe weather of the southern latitudes. Ferocious winds, blustery squalls, and intense downpours can spring up out of nowhere, mingling with perfect sunshine in a frustrating display of fickleness. But that same weather, when it hits Los Cuernos, often dances and plays with the light and atmosphere in a way that is a delight for photography.

On this particular day, after a beautiful morning exploring the Lago Grey region of Torres del Paine National Park, I was driving back toward my campsite as the winds picked up and began howling over the peaks. That led to the formation of incredible interlocking lenticular clouds over Los Cuernos, all of which basked in the afternoon sunlight.

It’s easy to over-complicate composition. In those moments where I’m not sure how to compose a scene I tend to fall back one of the simplest “rules” of composition: the Rule of Thirds. The rule states that you divide your frame up into an imaginary Tic-Tac-Toe board and place important objects in your photos along the lines and intersections of that grid.

In this image you can see I’ve done exactly that: the sky gets a third of the photo. The grass and forested hills at the bottom of the photo get a third. And the mountains in the middle get a third. So simple, yet so effective. Also notice where I’ve placed the most prominent tower in the scene: its most eye-catching, sunlit section is placed on the upper-left third intersection point. It’s a power point in the image and your eye goes right to that tower.

So the next time you’re stuck trying to figure out a decent composition don’t be afraid to fall back to the tried-and-true Rule of Thirds. Early on in my photography career I was all about labels. “I’m a wide-angle, color, magic-hour photographer,” I’d say. And if conditions didn’t fit into my neat little labels, well then I didn’t take a picture. But as I’ve grown as a photographer I’ve realized that these kinds of expectations cause the death of creativity. And now when I shoot, I let the scene tell me what there is to photograph, instead of the other way around. As a result, I’m “luckier” in the field, and enjoy photography more. Here’s a scene a younger me would’ve passed up, lamenting the lack of magic hour color. But current me saw the lack of color as a feature of the landscape, realizing that the dead color palette, rushing white water of the stream, and dramatic clouds in the sky would lend themselves beautifully to black and white.