Where Does the Time Go? When I took this photo back in 2012 and shared it on flickr, my original caption read: “it seems to me that the days are simply flying by lately. I wake up, then before I know it it’s time to go to bed again. What the heck, where does the time go?” And now, looking back over six years later the sentiment rings doubly true. Where indeed does the time go? I spent FOUR YEARS living in Santa Cruz exploring the coastline and taking photo after photo of crashing waves. Four years seems like a long time, and in truth those years entailed hundreds of nights spent at the ocean, but looking back I realize I’ve already been gone from Santa Cruz longer than I ever lived there.

And then I think about all the adventures I’ve had since then, all the places I’ve been and the people I’ve met, and those moments too have just flown by. In the end you can only have one takeaway from a reflection like this: life is short and goes by too quickly. So take advantage of all the moments you can to spend time building beautiful memories in places that make you happy with people you care about. In 2016 a friend and I took an overnight cruise through Doubtful Sound in New Zealand. That experience remains one of the highlights of my life. Honestly it’s just about impossible for me to do justice to the place, either through pictures or words. The magnitude and grandeur of the walls rising straight out of the water….The unearthly, mythical atmosphere that surrounds you….The innumerable waterfalls cascading down the beech-lined cliffs. It’s truly a magical place. To give you a sense of just how unusual and special Doubtful Sound is bear in mind that the water you see in this photo is the ocean itself (the ocean! Utterly dead and calm), and I shot this photo from the deck of a boat gracefully plying the Sound. Taken from Gareloi Island in the Aleutian Islands, Alaska, on July 28th, 2009

While working on a seabird recovery project in the Aleutian Islands I was fascinated by our local neighborhood. Foul weather occluded the nearby islands most days, but every now and again a break in the skies would allow the neighboring volcanoes to peek out of the clouds. Here is Tanaga, seen during just such a short break.

The Size of Ice

A gull can be seen flying in front of the impossibly huge face of the Aialik Glacier in Alaska. This was taken on a fun little morning in Moeraki, New Zealand when I was splashing around in the cool waters of the Pacific Ocean. The best light was happening inland so I got on the seaward side of this boulder to capture the show. Funny side note, did you know that in the Maori language Moeraki means “sourdough bread bowl”? So I invented a fun new sport! Set your camera up to do a 150-sec exposure in Milford Sound then see how many sandflies you can squash before the timer goes off. Current record stands at 43. Zen and the Art of Squishing Sandflies I can find no peace as deep as that which comes from marveling at the beauty of our planet, feeling the last rays of the day on my face, breathing in the fresh salt air of the sea, and crushing hundreds of sandflies into a slimy pulp. Taken at Hole in the Wall Beach near Santa Cruz, California, on October 10th, 2010

Santa Cruz has one of the most beautiful coastlines I’ve ever seen, with dramatic seastacks, interesting geology, and easy access. This shot is from my favorite spot in the area, Hole in the Wall beach, which is chock full of rocky shelves and lovely features. 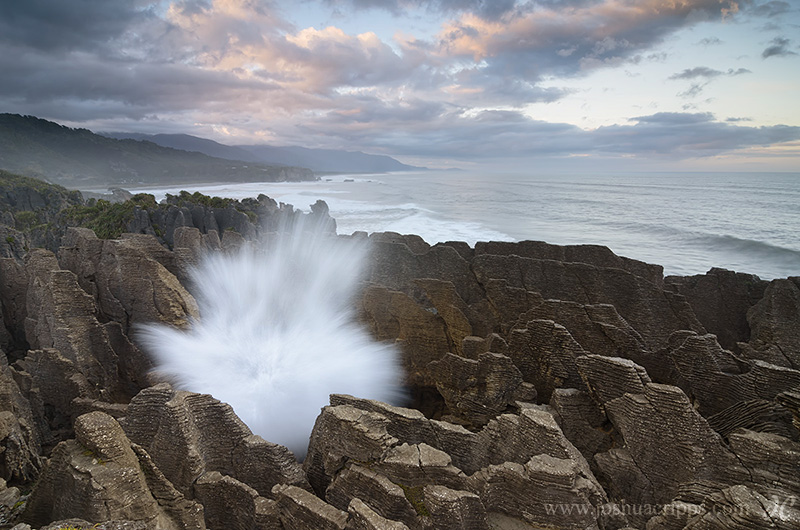 I really like pancakes. I also really like rocks. So when I found out there’s a natural phenomenon on the west coast of New Zealand’s South Island called The Pancake Rocks, I knew I was going to have to pay a visit. The pancake rocks are perched on a tiny coastal outcropping near the town of Punakaiki and do a lot to live up to their name. The rocks are made of a series of limestone “pancakes” that were originally laid down in a process called stylobedding, which is scientist speak for “we have no idea how this happened.” Over time the layers have been eroded away to form a rock garden of fantastically sculpted shapes. In some places the rocks have been eroded all the way down to sea level. So when the big swells at high tide come booming in, the water shoots out through the pancake rocks in a series of blowholes, the most spectacular of which is the Putai Blowhole. You have to be a bit careful while shooting the blowholes though, because as I learned, the wind and the fallout from these big blasts can fairly cover you and your gear with Ocean’s Breath.

Fall is finally bringing some interesting clouds back to the Santa Cruz coast and I am dusting off my seascape chops. On October 10th I went out to photograph Hole in the Wall Beach, in my opinion the most beautiful beach in the Santa Cruz area. The sunset was lovely: lots of color and texture. And I came away with four keepers from the night: two in color and two in black and white. Let me know what you think in the comments below. Cheers!