There are three things that can get you into trouble when you’re playing in the mountains. The first is overconfidence in your abilities for the terrain. The second is not being prepared in terms of equipment. And the final thing is changing weather. A lot of times you can work through one of those issues and be alright. But when those things start to collide and you have cascading failures, that’s where you can get into a serious situation.

That was exactly what happened when my friend Jessica and I decided to hike to the Mueller Hut in Aoraki / Mt. Cook National Park in New Zealand in May of 2016. The Southern Alps were getting blasted by storm after storm, making trekking difficult, but when we spied a 24-hour break in the weather forecast we decided to head up to the hut. Unfortunately for us the break turned out to be much shorter than we expected and brought much colder temperatures with it, including two days of blizzard conditions.

To make a long story short, we ended up being stranded in the hut for three days, ran out of food, and built a mattress fort to stay warm. In addition I also missed my flight back home to the US. After those three days of enduring the battering of this storm, the accompanying winds, thunderclaps, and avalanches, we woke up our final morning in the hut to extraordinary calm and clear skies. We walked outside to find three feet of fresh snow blanketing the surrounding countryside, and some of the most intense alpenglow I’ve ever seen igniting the atmosphere.

That, along with the news that the Department of Conservation was sending a helicopter to extract us from the hut (we couldn’t descend the hiking route due to extreme avalanche danger), led to a profound Hallelujah moment. Well so much for relaxing. After completing two somewhat intense circuits of the southern South Island of New Zealand I was feeling jazzed up to wind down. I arrived in Wanaka with the plan to do absolutely nothing for a few days -not even any photography- to recover a bit. But as afternoon slipped into evening the clouds began to sing an irresistible siren song that lured me down to the lake shore. And when the sun slipped below the horizon the sky lit up in a chorus of color. Deep blue basses, purple tenors, salmon altos, and ruby sopranos in their lilting voices high on top. One of the finest displays of visual harmony I’ve ever had the privilege of watching and I’m deeply grateful for the invitation to see the show. Can you ever get tired of this tree? Aoraki Mt Cook National Park is a place of superlative beauty: 3,000+ meter peaks like Mt Sefton and Aoraki Mt Cook, huge glaciers that fill valleys and hang off cliffs, rushing rivers of unusual color, and more often than not, dramatic light. It’s easy to shoot this park piece by piece, but if you try to get it all into one frame, it is really a squeeze. Following a storm in the Southern Alps I woke to find fresh snow dusting the tops of the mountains above Lake Wanaka. I was there with a photography tour I was leading and we brought our group to the famous Wanaka tree to photograph the sunrise. The post-storm weather was anything but settled and as the rising sun painted gold on the lingering clouds the wind whipping across the lake churned up crashing waves which added to the drama of the moment. Taken at Lake Tekapo on the South Island of New Zealand on May 9th, 2015

Being a photographer often means chasing the weather. But there are the rare occasions that the weather chases you. Midway through my 2015 New Zealand Photography Workshop my group was heading toward Mt. Cook Village. But arriving at the Mt. Cook viewpoint at the head of Lake Pukaki we could see it would be a fool’s errand to push on any further: huge storm clouds and walls of rain obscured the mountains. Driving up into the village would simply mean a boring afternoon spent inside keeping our cameras out of the torrential rainfall. Instead, we headed farther to the north where we could see that beautiful Lake Tekapo was likely enjoying decent weather.

And sure enough when we arrived at Lake Tekapo the sun was blissfully shining. And yet the swaying of the bus told us something else was happening as well: the wind was huffing and puffing. We jumped off the coach for a quick lunch break to the sound of signs blowing over, tree branches whipping, and jackets flapping. And unbeknownst to us while we were inside cafes scarfing down sandwiches and pastries, the wind was also carrying along with it some ominous clouds.

A fact that soon became clear once we stepped outside and saw a wall of deep gray marching down upon us at a speed I didn’t know clouds could move. We made our way to the Church of the Good Shepherd just as the wall of rain hit, splattering the landscape with a deluge of fat drops. But as quickly as it came in the downpour subsided. Grabbing our cameras the group began to shoot the beautiful church. And then, almost without warning, another bombast of rain came down, scattering us like ants. But this one too quickly subsided and those of us who weren’t too waterlogged and frazzled by the weather ended up down at the lake shore.

The wind was roaring across the open expanse of Lake Tekapo, whipping up ocean-size rollers cresting with foamy whitewater. And the storm clouds behind the lake began to close in, forcing the sunlight to struggle through in bits and pieces. I loved the extraordinary drama of the scene and in between wiping my wind-whipped eyes dry I captured this photo of the stormy display. Taken at Lake Matheson in the Fox Glacier township on the South Island of New Zealand on March 24th, 2015

Lake Matheson is an iconic New Zealand photo location, and from the main view point on Reflection Island surely millions of beautiful photos have been created. When I find myself in a situation like that I often approach things from out of left field by thinking “what would Josh NOT do here?” If I’d normally grab my wide angle lens, instead I’ll reach for a telephoto. If I’d normally include the sky I’ll try keeping it out. With this approach I find my mind starts working in unexpected ways and seeing unexpected things. And before I know it I’m beginning to craft I photo I otherwise wouldn’t have taken.

This was the exact case this particular morning at Lake Matheson: there were beautiful clouds, the gargantuan, snow-covered forms of Mounts Tasman and Cook were clearly visible, and the lake itself was as still as pooled silver. My instincts were screaming to grab the wide angle classic shot, and of course I did. But then I started thinking about what other smaller scenes could create powerful photos. The symmetric lines of the Fox Glacier canyon had been catching my eye all morning, and as the sun cleared the mountains to the east it lit up one of the canyon’s richly forested walls. The spot-lighting created a vivid contrast against the darkness of the opposing wall and lent the scene a simple, graphical quality. With the two slanting canyon walls reflected in Matheson’s surface my eyes were drawn to the X they created and I knew I had found my “Left Field” shot. 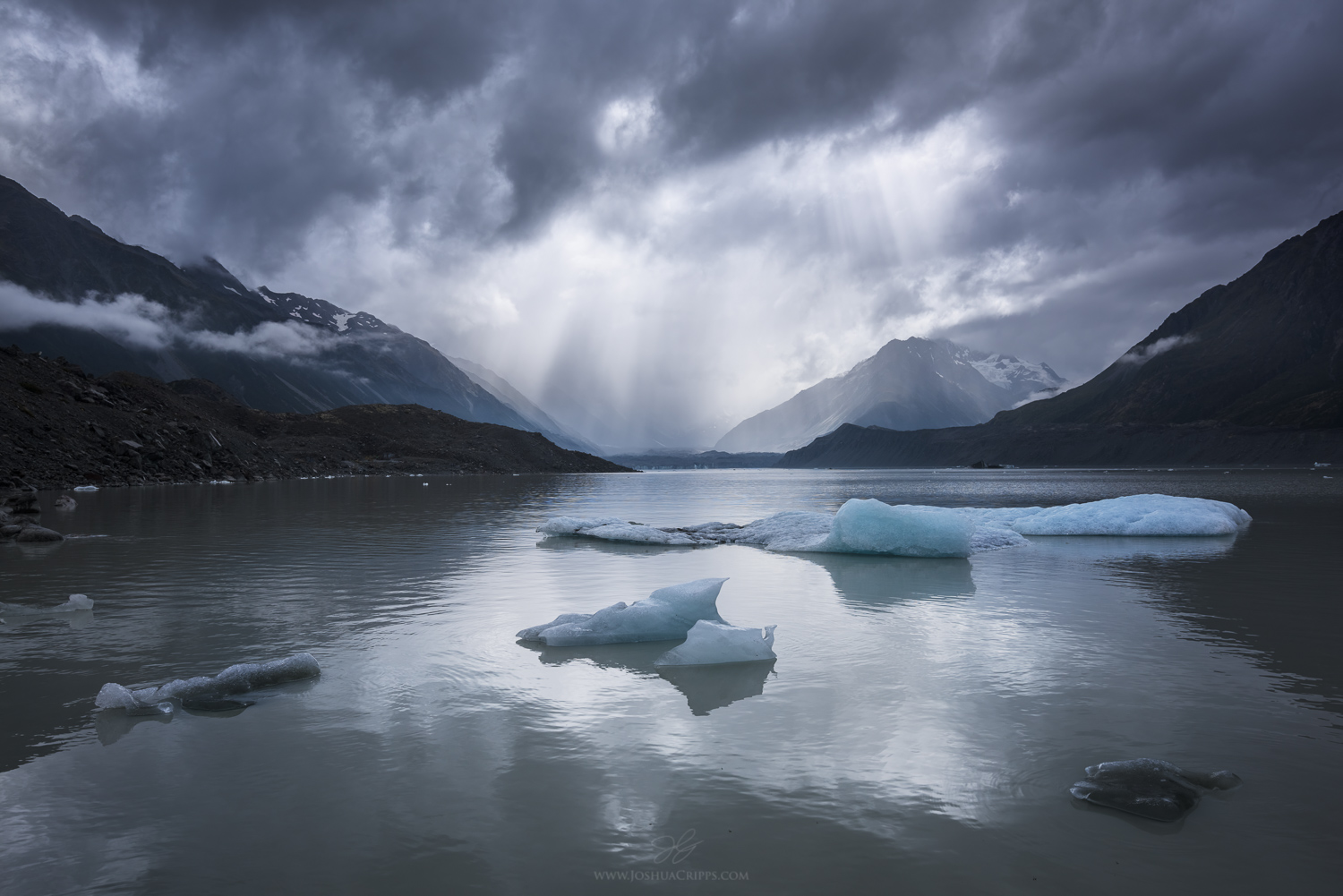 A big part of being a nature photographer is no, not waiting, but watching. In fact, I might argue that that’s the best part of being a nature photographer: watching the beauty and wonder of the natural world unfold around you. And not just watching, but also experiencing. Hearing the sound of the wind as it rushes down a mountainside, feeling the raindrops as they splash your face, and smelling the petrichor of freshly wet soil. It’s in these moments you feel connected to the place you’re in, and the barrier between yourself and the “outside world” becomes less distinct.

While photographing icebergs at Tasman Lake I was fortunate to feel such a moment of deep connection and presence. The day was thick with thunderstorms and I was intent on capturing their drama. With a light patter of raindrops falling on my head I made the short walk to the Tasman River outlet, as this is where most of the icebergs in the lake end up. Seeing a few crepuscular rays breaking through the clouds at the head of the lake I quickly set up my camera, thinking they might disappear.

But rather than disappear the rays only grew stronger as they swept down the Tasman Glacier valley and out across the lake. And as those beams passed overhead and vanished behind me, more took their place at the top of the lake. This happened over and over, and for a full two hours I watched, heard, felt, and photographed this stately procession of light and shadow as it marched across Tasman Lake.